skip to main | skip to sidebar

The boys have been building "dinosaur habitats" in the backyard for a few weeks now. They are basically a bucket of water, rocks, grass and some plastic dinosaurs. Super cute. Right? The only problem with this is that they want to bring them inside. Uh, no.
So, I was thinking terrarium and saw this awesome one from Yellow Brick Home on Pinterest. I have these glass hurricane vase things from my MIL (they used to house festive holiday decos - like glass ornaments or Valentine's conversation hearts with a candle). They have been collecting dust in a cabinet for a while, so I washed them, loaded the boys up and headed to the Home Depot.

I couldn't find charcoal, so I hope they last. The original tutorial suggested a layer of rocks, one of moss, one of charcoal (for absorbing extra water) and one of potting soil. Since my my hurricanes have a little foot on the bottom, I hope the extra rocks will help with drainage.

We bought some succulents and ferns, moss and potting soil and reused the rocks from the fish tanks that no longer hold fish (RIP Fishy and Happy Fish II). Here's how they turned out. I love them (and those boys). 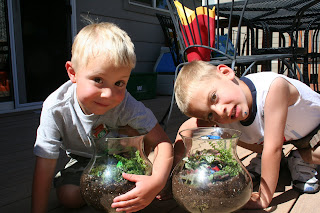 Here's how we made them. First, we washed the rocks (I was nervous about any residual fish germs). Then layered everything in the hurricanes like this: rocks, moss, potting soil. Next, we planted our little pants. To finish off the look, the boys decorated the top with dinosaurs, rocks and a little patch of moss (that's the grass). We watered them and done. The boys want to put them in their rooms, but I like them so much they are currently decorating our living and family rooms. Here is Parker's (the blue stuff on his chin is marker). 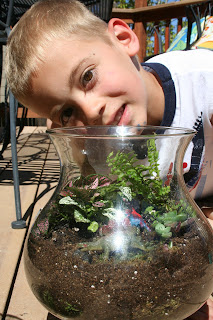 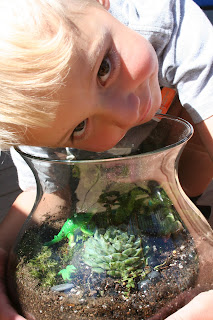 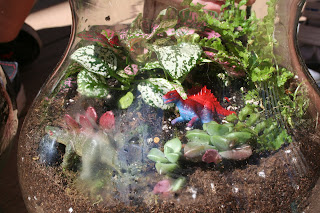 Posted by One Desperate Mom at 7:00 AM

One Desperate Mom
I'm Becca. I'm a mom, but never imagined I'd be one. I'm taking it one day at a time and loving it (most days).